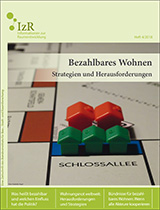 17,54 euro was the price of a square metre of a newly rented apartment in Munich in the middle of 2018 according the Federal Institute for Research on Building, Urban Affairs and Spatial Development (BBSR), and that was the net price without heating. The city on the river Isar is therefore the most expensive city in Germany. But housing is also expensive in many other cities: in Frankfurt am Main tenants paid on average 13,52 euro per square metre, in Stuttgart 13,21 euro and in Freiburg 12,05 euro. Although these are extreme examples from large cities and university cities: in many medium-sized and small cities and even in some rural counties the prices for newly rented apartments have also risen considerably in the past years.

In order to escape from the high rents, many people – particularly those with a family – are living in a different municipality from where they are working. In 2017 already 60% of the German employees commuted to another town. The average distance of a single journey to work has also risen: from 14.6 kilometres in the year 2000 to 16.8 kilometres in the year 2015.

Commuting is by no means the only challenge resulting from expensive housing. The situation on the housing market is one of the great issues of social policy in Germany. And this has been so for decades, if not for centuries. But what is actually affordable? And how can the Federal Government, the federal states, the municipalities and other actors create affordable housing? These are some of the central questions which our authors consider in this issue.

Practical examples, for instance from Potsdam, Münster and Wolfsburg, give insights into the local situation and work. They show how the municipalities are dealing with housing shortage, develop solutions and are able to shape the future of housing. Other articles show what Germany can learn from abroad and how the situation differs from that in other countries. Is more or less regulation necessary on the housing market? And which role does the interaction of politics, administration and the economy play?

Most articles are in German (two are in English). 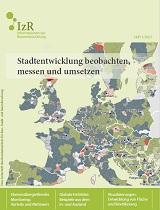 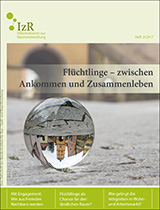