The project analysed the promotion of the urban dimension in the Structural Funding period 2014-2020 on the basis of all operational programmes (OP) in Germany. A focus was on the ERDF (European Regional Development Fund) and the ESF (European Social Fund). Secondarily, the EAFRD (European Agricultural Fund for Rural Development) was also considered. Individual examples were examined in more detail and illustrated. Based on these examples, the project team worked out guidelines for the subsequent 2021-2027 funding period as well as for the formulation of the partnership agreement and the operational programmes.

In Germany the EU-financed funding of integrated urban development projects has proven successful since the introduction of the URBAN Community initiative in 1994 and mainstreaming in the regional funding of the operation programmes of the countries in 2007. It gave significant impetus to new funding approaches and measures in the field of integrated urban development in the various EU member states. The Barca report “An agenda for a reformed cohesion policy” (Barca 2009) of DG Regio aiming to assess the efficacy of the cohesion policy to date, very significantly criticised the customary top-down funding policy to date of the EU member states and regions. Based on this criticism and the call for a stronger integrated place-based approach, the call for interlocal and urban regional development strategies therefore has become the focus of the funding policy since 2014 in addition to the upgrading of disadvantaged urban neighbourhoods.

In the context of the ERDF Regulation of 2013 and the associated minimum quota of 5% of the ERDF funding, at national level, for financing sustainable urban development projects, the urban dimension was incorporated in the EU Structural and Investment Funds. Urban development has also become the focus of attention by way of the EAFRD and as a result of newly created instruments such as the integrated territorial investment (ITI) and the community-led local development (CLLD). This study shows how the countries in the 2014–2020 funding period have implemented the urban dimension established in the ERDF-OP – and partly also in the ESF-OP – or which instruments were used for implementation. The differentiated consideration of the programme planning and project implementation shall demonstrate which strategies were utilised at EU, German national or federal state level and to which project ideas, constellations and complexities this has led.

Contractors of the project were the Brandenburg University of Technology Cottbus-Senftenberg and the German Association for Housing, Urban and Spatial Development. 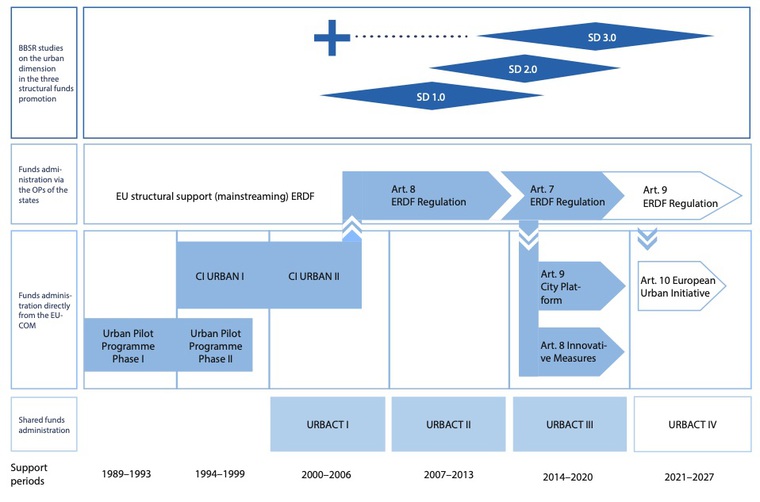 Funding structure of the ERDF and the urban dimension since 1989 Source: BBSR/BTU Cottbus-Senftenberg/DV e.V.