The comparison was based on qualitative and quantitative surveys in the form of several queries (courses of time) on outflows and approval of funds as statistical surveys. Written and telephone guideline interviews with decision-makers at federal state level (ministries) and project level (municipalities), who were largely responsible for defining the ERDF programmes or implementing projects, provided information about correlations and backgrounds of the recorded values, about the system of implementing the projects, administrative challenges at federal state and project level and the added value created by applying the urban dimension. Based on this knowledge and the experience gained from the two urban dimension studies that were set up in a similar manner, it can be observed and analysed in the long term.

In order to illustrate this funding approach, representative project examples were selected on the operative level (project level) that address a broad range of funding backgrounds, territorial types, fields of action and thematic areas in various urban and spatial categories. 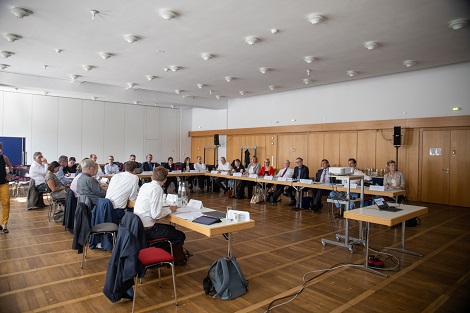 Discussion at the workshop on 4 September 2019 in Berlin Source: BBSR/BTU Cottbus-Senftenberg / DV e.V.

Another central element of this investigation was to conduct two workshops to exchange with national and European parties involved. The first workshop was based on reports of the German Federal Ministry for Economic Affairs and Energy, the German Federal Ministry of the Interior, Building and Community and representatives of the federal states on the funding period 2014–2020 and on the definition of the upcoming 2021–2027 funding period.

Interim results and field reports already facilitate a discussion about and reflection against the backdrop of deriving information about whether to continue the urban dimension in the coming funding period. A second workshop, now geared towards the European dialogue, was conducted with members of the European Parliament, representatives of the European Commission, numerous specialists from European cities, from the European offices of various associations, from institutions such as the European Investment Bank (EIB), the Committee of the Regions (CoR), from national ministries of other member states as well as experts from the URBACT programme.

The workshop mainly served the exchange of experiences among European cities and regions (exemplarily from Italy, Poland, France, German and the Czech Republic), which used funds for sustainable urban development with various objectives and instruments during the 2014-2020 funding period.