The evaluation of the data based on the above-mentioned methods confirmed the share of the urban dimension in the planning phase of the funding period of around 14% for urban development. This corresponds to approximately EUR 1.45 billion for the 2014-2020 funding period. Despite many administrative hurdles, the interview partners from the German states saw great added value in the urban development supported by ERDF and ESF. They said it made a significant contribution to the implementation of key state policy objectives, provided new impetus for integrated urban development on the ground and, for most municipalities, was a valuable addition to federal and state funding or KfW programmes.

The majority of funds were used for the investment priorities 6e (revitalisation of derelict areas, revitalisation and upgrading of the urban development environment) and 9b (social inclusion and combatting poverty and any form of discrimination). Investment priority 9b covers about 45%, i.e. EUR 688 million of the total urban dimension.

Another important finding from the discussions and roundtables was the low acceptance of territorial instruments introduced by the European Commission, such as ITI (integrated territorial investment) and CLLD (community-led local development). Furthermore, it was evident that support under Article 7 was only provided in about half of the countries. This was not due to a general rejection of spatially integrated approaches, but rather to many years of experience and the use of integrated instruments such as regional development plans and Integrated Urban Development Concepts (IUDC), which made it unnecessary for the EU to adopt new guidelines - especially since these involve considerable administrative requirements. 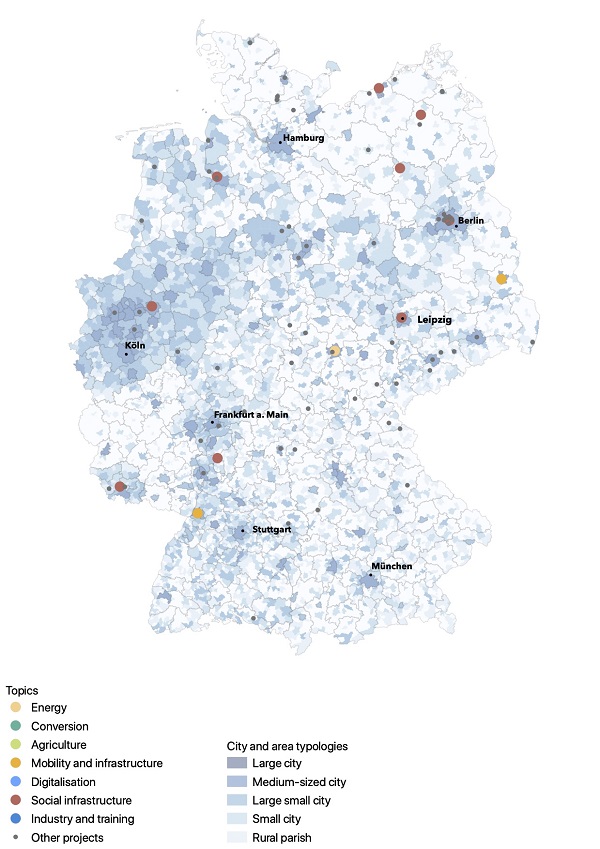 Selected ERDF project examples according to the settlement structures of the BBSR and thematic fields Source: BBSR/BTU Cottbus-Senftenberg/DV e.V.

In a central project inquiry, the federal states named selected projects that they considered to be particularly interesting and complex both within the ERDF funding process and in connection with other development and funding approaches in the municipalities. The classification of the mentioned projects according to city typologies shows a clear surplus of large and medium-sized cities compared to smaller municipalities. Possible reasons might be the formation of regional communities, on the one hand, and, on the other, the need to present a strategic action concept as well as the huge personnel input that is required to implement the projects.

In mid-2020, many of the stated projects were still in the process of, the partly early, implementation despite the duration of the funding period from 2014 to 2020. There were different reasons for this. On the one hand, the Structural Funds led to immanent processes. On the other hand, the strong construction activity with a high utilisation of capacities of the companies had a dampening effect. In addition, as a result of the long planning phases, the land and construction prices exceeded the originally planned amount of costs. Ultimately, the high complexity of projects with specified interlocal stakeholder structure and the combination of different support programmes and techniques lead to costly project development and decision phases.

The 2014-2020 funding period with its framework documents in the timeline based on an exemplary project progress Source: BBSR/BTU Cottbus-Senftenberg/DV e.V.

Derivations for the subsequent funding period 2021-2027

The information available by the end of 2020 about the new funding period indicate that the new regulations have created a conceptual framework. For a large proportion of the German states it will provide the possibility to fund integrated urban development projects. The greater thematic variety within the policy objectives set by the European Commission and the establishment of a more flexible approach to integrated spatial support mechanisms as a separate policy objective should facilitate the work: especially the programming phase of the OP at federal and state level, the preparation of support strategies and the support by projects at local level. This could take some of the complexity out of the EU funding system, which for many municipalities already requires administrative and technical skills to bring local urban development projects into line with the requirements of EU funding. In view of the high pressure on municipal budgets, which is likely to be exacerbated by the noticeable drop in trade tax revenue due to Corona, the financial contribution to be made by the municipalities themselves in return to EU funding is not a matter of course for many municipalities.

Further pressure is again created by the late start of funding, especially for the programme managing authorities. Even in this funding period, a swift start of competitions and project calls will hardly be possible. Due to the reconstitution of Parliament and the EU Commission in 2019 and the tough negotiations about the 2020 multi-year financial framework, this chance has been missed. Even towards the end of 2020, neither the partnership agreements nor the OPs of all countries are available. The necessary “translation” into related federal state support guidelines, calls for tenders and implementation of competition procedures and project calls must be pushed further into the funding period, so that towards the end there will probably be renewed pressure to provide funds and implement individual projects in good time. To ease this pressure, an agreement was already reached at the Special European Council on 21 July 2020 to maintain the n+3 rule at least until 2027.

As a result, the following brief theses can be formulated for the new EU funding period: