As numerous successful youth participation projects in recent years have shown, young people want to – and are able to – play an active role in shaping their living environment and in the development of their town or city. Until now, research has focused on projects in large towns or cities. At the same time, it is well known that small towns in structurally weak areas are particularly dependent on civic engagement to maintain and enhance the quality of life. The study therefore aimed to identify innovative participatory youth projects in small towns and to describe their impact on the development of the towns and their surrounding area.

Several research projects and model projects – some of them commissioned by BMI and BBSR – have studied youth participation in urban development and trialled it in practice. They researched how young people understand and use urban spaces and what ideas they have for the future of these spaces. The studies identified that young people displayed a high degree of initiative and willingness to assume responsibility, in particular in projects of the “Stadt selber machen” (Do it yourself urban design) category. They are an important pillar in the field of youth participation alongside other formats that allow people to have a say and play an active role in decision-making processes.

Civic engagement and participation are also important in small-town and rural contexts. Numerous empirical studies and research projects, such as the research area exploring the potential of small towns in peripheral locations, which is part of the German government's experimental housing and urban development programme, demonstrate the fact that civic engagement and collaboration can create a special cohesive force and at the same time enhance the quality of life.

The study of youth projects in structurally weak and rural areas combined the two aspects of civic engagement outlined above – youth participation and involvement in the development of small towns. In this way, the research team identified specific forms and characteristics of youth engagement in small towns in structurally weak areas and identified potential for local development. They studied exemplary innovative projects and drew transferable conclusions. 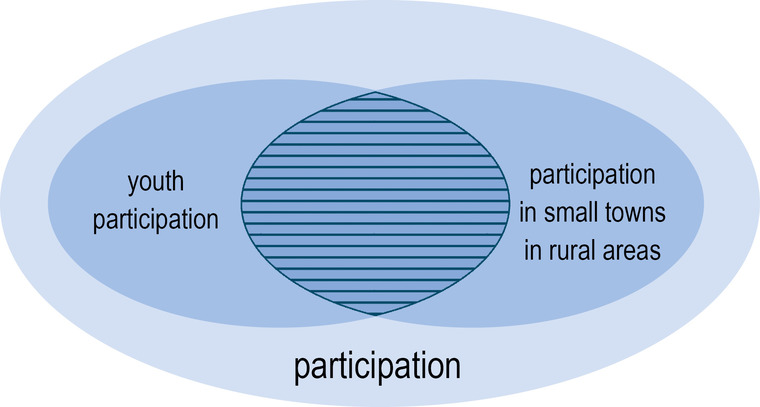 The study concentrated on two key questions: Which youth projects exist in small towns in rural and structurally weak regions? What are their characteristics and how do they differ from those in larger towns and cities and densely populated areas?

The research project was carried out by the Berlin-based Planergemeinschaft für Stadt und Raum eG.