Research Project: New Urban Agenda of the United Nations: characterising, measuring and visualising the progress of its implementation across various levels

Compact urban development, the efficient use of resources, mobility in cities and regions as well as the well-being of all are the core messages of the New Urban Agenda adopted by the United Nations as global guiding principle of modern urban development. From 2022, the United Nations will report every four years on the progress of its implementation. Germany contributed with a national report in 2021. Based on the BBSR’s typology of cities and regions, cities and communities of different sizes and geographical locations were active partners in developing the report.

The New Urban Agenda targets these challenges by pursuing new avenues. It guides cities and communities in planning, design, finance, development, governance and administration in order to accommodate sustainable development – and in terms of the 2030 Agenda and its Sustainable Development Goals (SDGs), also adopted by the United Nations. Local self-administration, subsidiarity and decentralisation as well as respective governance structures thus constitute core principles.

Working in close cooperation with selected cities and communities, the project is aimed at characterising, measuring and visualising the progress achieved in Germany in implementing the New Urban Agenda by means of texts and graphics. The project team has chosen the cities primarily from the group of municipal signatories to the 2030 Agenda (see map).

The project has been based on the following guiding research questions:

Map "Municipal signatories of the specimen resolution on the 2030 Agenda" 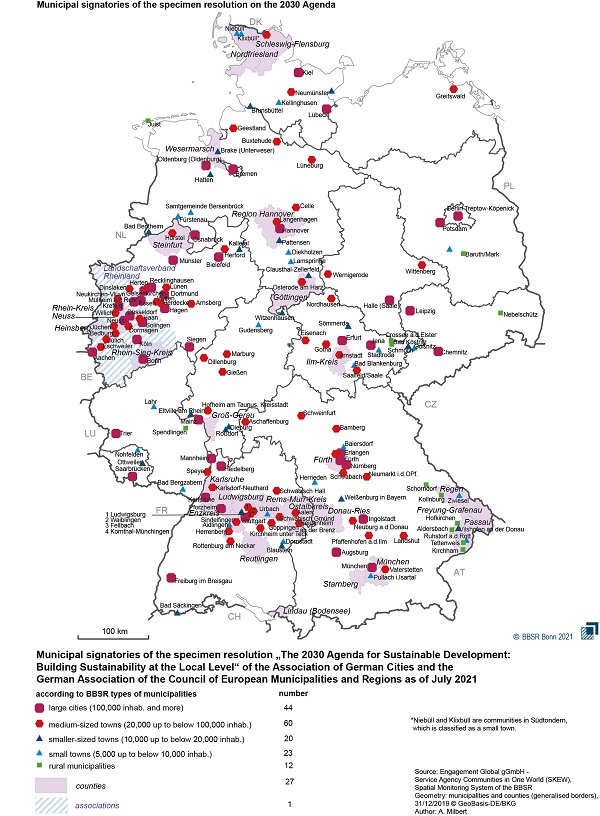 The map is available as download in English and German (see "Publications").

The project was executed by Deutsches Institut für Urbanistik gGmbH, Berlin, Germany, on behalf of the BBSR.